An insight into The Player Care Group with Hugo Scheckter

Spending millions of pounds on players yet not providing support away from the training ground is becoming a thing of the past. The days of players not liking an area due to the weather, the commute should be a thing of the past. Although unable to affect the weather, the increasing number of player care staff throughout football are making a difference in ensuring players hit the ground running and have everything they need to maintain a lifestyle that will ensure they are prepared when entering the field of play.

The Player Care Group was established in 2020 by Hugo Scheckter and has been on the rise under his stewardship ever since. The Association of Sporting Directors heard from Hugo at a recent event and learned all about one of the fastest growing areas within football.

Since presenting to the Association of Sporting Director members, Scheckter and The Player Care Group has rolled out an audit function for clubs to help assess and address their player care supports. We caught up with the Londoner recently to hear more about the role they play within the game and why Sporting Directors should support the player care function within their clubs.

Commencing his journey within the football industry as Team Operations Manager at Indy Eleven in the NASL, Scheckter returned to the UK as Player/Team Liaison at Southampton FC where he helped set-up their player care department. The Londoner then moved to the East-End with West Ham United as Head of Player Care before stepping out into the world of business in 2020 after almost three years with the Hammers.

First up, Scheckter gave an overview of The Player Care Group as they continue to grow domestically and internationally.

‘We are the first company that focuses on player care as a whole and have three main sides of the business.

‘The consulting and auditing side which is our bread and butter, working with clubs and organizations across the world to improve their player care. This is done in a few different ways such as through an audit process, ongoing consulting process or whatever works best for the client. We go into the club for example and we give them a lay of the land of where they are and help them from there.

‘Then we have educational courses which we have been running for over a year now and they have gone down very well and we have had all sorts of people enrol. We have people who are students who want to work in player care while now we have a lot more currents player care staff or people working in football who want to use it as part of their club’s training programme. Then we have people who sit outside of football, their business touches football and they want to understand what clubs are offering so they can tailor their own services to better serve the clubs they work with. That could be an estate agent, a lawyer, account – those types of businesses. Lastly, we have people who are just genuinely generally interested in the field.

‘We regularly have club staff on our courses as they spend their training budgets. The current cohort for example has 12 out of 16 working in football currently and of that eight are from women’s football and 10 are based in America.’ Scheckter added.

The third strand of the business is one that is growing as clubs increasingly turn their attention to player care.

‘If clubs are looking to hire a Head of Player Care, a Player Care Assistant or anywhere in between, we have a large database of not only course graduates but people more widely in the sport who we can help connect the dots with.’ Scheckter said.

With experience in the US, Scheckter highlight that it is often Europe where clubs look to for trends in footballing structures.

‘Australia is seen as the hot spot of the player well-being as they would refer to it as. There is some really good work being done specifically by a guy called Dr Steve Johnson, who runs the Wellbeing Science Institute. I certainly learn from him and he is really pushing the Player Wellbeing side like no other.

‘And America is one that is really rapidly expanding too with clubs hiring their first or even second player care member staff, which is very new. A lot of countries like to look to the to Europe and especially England to see what we are doing here’ he said.

Members of the Association of Sporting Directors were intrigued by some industry insights when Scheckter presented and the former Hammer was thrilled to share thoughts and experiences with the group.

‘It was a really interesting group. It was the first time I had presented to a group of Sporting Directors before and it was fascinating to hear all their different perspectives of player care. Some were really on board with it, some of them not so sure. Some felt that it was vitally important while some felt like it was something that should be done across departments and not have a set department for it. It was a really good discussion and really good engagement. 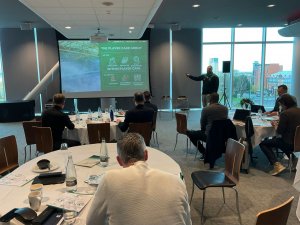 ‘I picked up bits that I had not thought of or had not focused on before. When presenting to a group, it is always interesting to see what the sentence is you say or the example you use that gets people’s attention or gets people nodding. For me it was a really good learning experience, a great networking experience and an excellent event.’ Scheckter said.

The event has led to some further conversations with potential opportunities to cross paths in the future.

‘We’ve had a number of follow-ups and it did lead to some good conversations and I think potentially some business down the road. It is one of those events that it is just great to be in a room with those people, to be seen at the same level and you know just to join in their experience and working day. It was hugely worthwhile and something I would do again in the future.’

When looking to player care within clubs, the Londoner emphasised the need for a top-down approach to function effectively. While like Sporting Director roles, player care duties will differ from club to club.

‘I think the Sporting Director needs to buy into it or at least allow it to function. Every club is setup so differently both in terms of Sporting Director / Technical Directors but also how their player care is set-up. Player Care is a role that changes so widely even if the title is the same, the function can be focused so differently. It can be a very wellbeing focused, it can be team operations, it can be player relocations, it can be more commercially or player appearance focused, more family focused. So there is so many different things.

‘The clubs that do Player Care the best is when it’s a top-down approach and that the senior leadership in a club buy into it rather than having one person who really believes in it below, trying to push its way up.’ said Scheckter.

The recent addition of the audit has allowed clubs at all levels look to raise the standard across football with Scheckter expressing a real desire to inspire positive change.

‘The great thing about the audit we have developed is that it can be used for lower-level professional clubs looking to just get to a basic level, right up to the top clubs in the world. For me, the idea with the audit and the Player Care Group as a company is that we’re going to grow sustainably. My goal is not to take over the world but to be that leading light in player care and give really relevant help when needed. So we are not trying to roll out a thousand audits, it is trying to do the decent work.

‘Every person who has been through our course would recommend it to someone else which is hugely important for me. All the clubs that have worked with us are on their consulting and auditing side have been very happy as well and really seeing the value. For me that is more important to get great feedback than it is to try and get loads of the clients through f the door. I am quite happy with where we are going right now.’ Scheckter said.

May is set to be an exciting month for the former West Ham man with the first in-person cohort alongside an alumnus meet-up which is ever increasing in size.

‘We’ve announced a weekend in May (21st / 22nd) for our next course which is in-person, taking place in London over two days. We usually run it over 6 weeks on Zoom but this time we are doing the whole thing that weekend. It will be great to be live and face-to-face and we have an alumnus meet-up with over 100 invited to come along for drinks and networking.

‘Our courses give participants a really personal experience and we’ve got three experienced teachers who give all sorts of different opinions and we are all different and we all teach differently. We are all people who have done player care for years and years and we encourage students to take bits from each of us because we are all very different and to build their own philosophy.

For us in terms of participants, America’s been huge both in terms of the men’s and women’s game and overall I think it has been 22 different nationalities so far. And we have had over one hundred complete the courses and fifteen working in Player Care now which is a good percentage and one we are really pleased with.’ Scheckter said.

To find out more about The Player Care Group visit their website here.

Article wrote by Colm Hand, student on the Football Industries MBA at the University of Liverpool